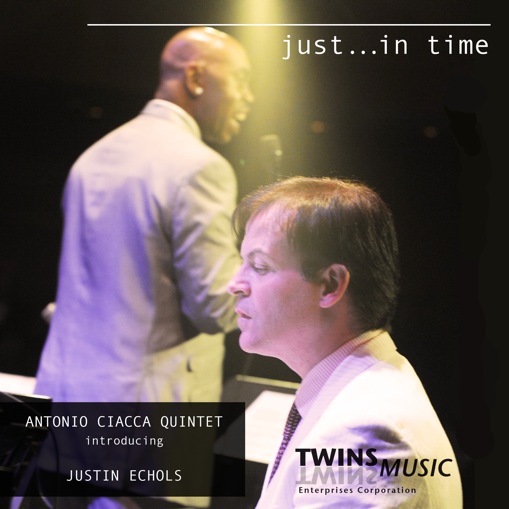 SKU:
$15.00
$15.00
Unavailable
per item
ANTONIO CIACCA QUINTET introducing JUSTIN ECHOLS
A car accident can change the path of a man’s life not necessarily for the worse.

At first Justin Echols thought the change was for the worse but as time of the recovery went by he rediscovered his dormant talent for music.

With the help of his family the Sgt. Echols found a way to send a demo cd with a letter to Jazz At Lincoln Center. The letter was picked up by renown jazz pianist and at the time Director Of Programming Antonio Ciacca. The Italian American pianist and composer has an instinctive intuits for talents over the years. His reaction was to write back to Mr. Echols recommending him get serious about music by finding a Jazz piano teacher in Oklahoma City area. Mr. Echols response was really serious: He decided to travel to New York City to studied with Mr. Ciacca in person.

The natural evolution of the relationship between the two is Justin’s debut album with a top notch New York Jazz musicians led by maestro Antonio Ciacca.

Mr. Echols comes straight from the tradition of Nat King Cole and Ray Charles with his soulful warm tenor velvet voice. Mr. Ciacca encouraged him to explore the lost art of vocalize in particular Eddie Jefferson, King Plasure and Jon Hendricks. The result is a fresh and swinging album where Justin swing some old classics like Our Love is here to stay, Don’t, get around much any more, All of Me

And some lush, immortal ballads like Stardust, The Very thought of you.

The band led by Antonio Ciacca who write all the arrangements has his regular trio (Paul Gill and Peter Van Nostrand) plus the best jazz guitarist in town Joe Cohn and multi woodwind player and great arranger him self Andy Farber.

Justin Echols proves to be an excellent lyricist as well providing the word for Ciacca’s 2 original songs on the album: ”Wally’s” and “Dany My Dear”.

Antonio Ciacca is to be very proud of on of his best pupils. Justin can be hears often as special guests on Ciacca’s appearances in the Usa and in Europe. At his recent (October 2012) New York City Big Band debut with Justin as special guest Ciacca says:

“I encourage all my students to be serious about music but Justin is a case on his own. There was a place in Jazz for him. “

Not Available
Powered by